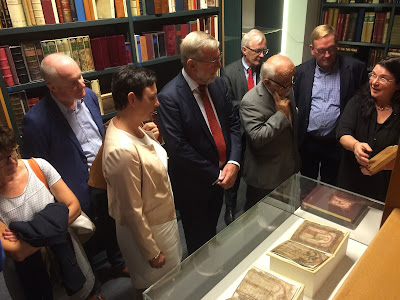 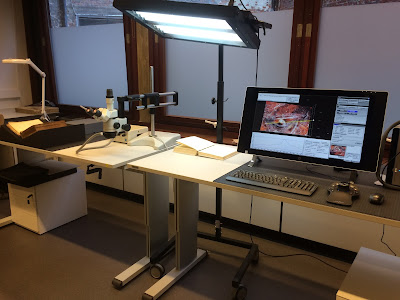 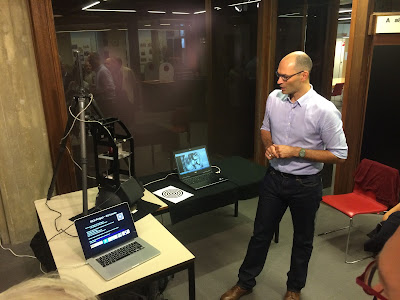 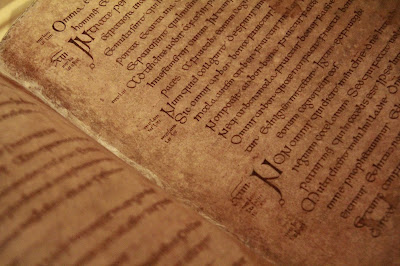 
The historical interpretation of the Codex Eyckensis (story of Harlindis and Relindis)
by Annelore Vriens
At the end of the 7th century, several monasteries were founded in the Meuse region as a result of the spread of Christianity.  Young Anglo-Saxon missionaries travelling from current England and Ireland preached the Christian faith and introduced it in the Meuse region from the 6th century. The most famous of them was Saint Willibrord, who travelled with 11 missionaries to our region. In 695, Willibrord became the first bishop of Utrecht. He also played an important role in the story (or should we say history) of the Codex Eyckensis and the monastery of Aldeneik.
The exact foundation date of the monastery of Aldeneik is not known, but can probably be situated between 720 and 730. Unfortunately, no remains have been preserved from that early Merovingian monastery, but the history lives on in the legend of the two founders, the sisters Harlindis and Relindis. They were the daughters of a Frankish nobleman, Adelhard and his wife Grinuara.  The story of their lives is written in the ‘Vita Harlindis and Relindis’. After the religious studies of the sisters in Valenciennes (north of current France), Adelhard founded a monastery for his two pious daughters. In that period it was common that rich families founded monasteries to express their devotion to Christianity.
Politically and historically, we are talking about the end of the Merovingian period and just before the Carolingian period, so before the coronation of Charlemagne in 768 as king of the Francs. In the early 8th century, a male monastery was founded in a town called Susteren (Meuse region), with the support of the rulers, the pippinids. Susteren is sitatuated just east of Maaseik at the Dutch border and a stone’s throw north of St. Odiliënberg, where a monastery was founded in the first half of the 8th century.
In this story we focus on the monastery of Aldeneik near Maaseik. The designation of ‘Aldeneik’ or ‘Oude Eycke’ only came after the foundation of ‘Nieuwe Eycke’ or current ‘Maaseik’ centuries later in 1245.
All we know about the monastery and the sisters Harlindis and Relindis comes to us from the ‘Vita Harlindis et Relindis’. Their biography was written at the end of the 9th century, a century after the estimated death of the sisters.  At that time the wooden church of the monastery was demolished and a new one was built in stone. By this occasion, the bones of the sisters were elevated to relics which contributed to the canonization of Harlindis and Relindis. The original Vita writings were not kept, but were included in the ‘Acta Sanctorum’ written in Latin by the Bollandists in the 16th century. According to these writings two Anglo-Saxon missionaries, Willibrord and Boniface, visited the monastery. Harlindis was consecrated by Willibrord and, after Harlindis’s death, Relindis was consecrated by Boniface. Saint Willibrord was also the head of the nearby Benedictine monastery of Susteren.
Information about the Church treasures of het monastery of Aldeneik can also be found in the Vita: …bright fabrics adorned with gold and pearls, the Gospel books of which the colours were so shining that it seemed they just had been completed, the precious relics of the holy sisters…. And indeed, the Vita signs out that Harlindis and Relindis produced the Casula, the Velamen and the Codex Eyckensis. They learned to weave and write during their stay and training in Valenciennes. The reality is probably different. Willibrord founded a scriptorium in Echternach, Luxembourg in 706. Manuscripts model books, who served as an example for other books, travelled along with the missionaries. Manuscripts are effectively easy transportable artifacts … 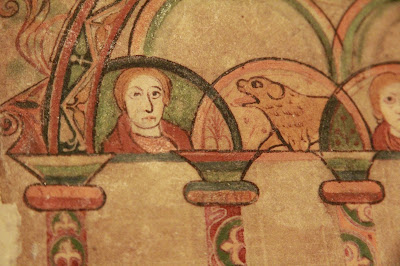 So, it is quite possible that, on his journey, Willibrord travelled with manuscripts produced in the scriptorium, such as the Codex Eyckensis for example, to Utrecht and donated them to different monasteries along the road. This explains both the composition of the Codex into two parts: Part A, consisting of only few canon tables and a miniature and part B, consisting of canon tables and four Gospels. On the other hand it also explains the insular influence on the decoration, which is most visible in Part A. ‘Insular’ refers to a descent of the English and Irish Islands because Willibrord had Anglo-Saxon scribes in his scriptorium in Echternach. Part B testifies again the continental tradition. Therefore we could say that the Codex Eyckensis reflects the duality of the identity of the scriptorium of Echternach. The gospel books, written in Latin in a half-uncial script, were probably copied between 730 (estimated foundation date of the monastery of Aldeneik) and 750-760.
The church treasures gave the monastery of Aldeneik a certain prestige and respect in the Meuse region in the 8th century. But still now the Codex Eyckensis, the textiles and the relics are tangible artifacts of the rich history of Aldeneik and Maaseik.