Unique glimpse behind the scenes

Unique glimpse behind the scenes in the research laboratory at the Royal Institute for Cultural Heritage (KIK-IRPA, Brussels) 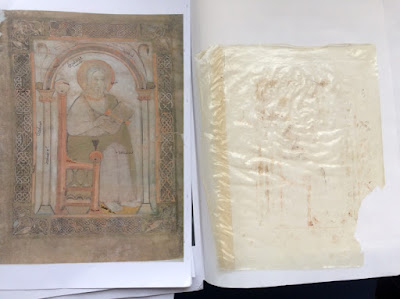 The Flemish museum consultant Anne Milkers had the opportunity to have look behind the scenes at the pigment investigation of the Codex Eyckensis.  She was guided by Maaike Vandorpe, technical expert at the laboratory of papers, leathers and parchments of the KIK-IRPA.


Although the Codex Eyckensis is currently being investigated at the Book Heritage Lab of the KU Leuven, Dr. Marina van Bos and Maaike Vandorpe have already started with the first analyses in their KIK-IRPA lab in Brussels.


Twenty five years ago, prof. Lieve Watteeuw removed the various layers of plastic foil from the parchment.  The foil has been carefully kept at the KIK-IRPA ever since.  The plastic sheets were used in a comparative study to the parchment folios (as shown in the picture). The plastics clearly show pigment residue left from the original parchment folios. This is a blessing in disguise! The pigments and inks on the plastic foil can now be analyzed with the µRaman spectroscopy (see photograph). 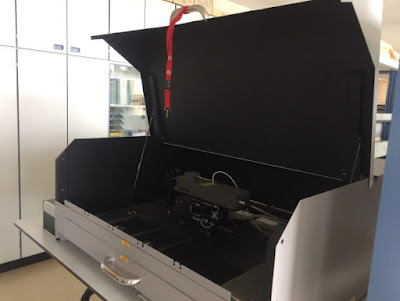 This analysis is non-destructive, because it does not require to take a sample of the pigments. The plastic foil will be placed directly under the laser. It is possible to detect red and yellow earth pigments, minium  lead (red) and orpiment (yellow).  At a later stage, complementary but destructive analyses of the pigment residues left on the plastic sheets can give more information on the possible use of organic colors.


In 2017 the old manuscript will be transported to the lab of the KIK-IRPA in Brussels. Here, further investigation with the µRaman spectroscopy and the newest non-destructive analysis by macro XRF mapping, will characterize the pigments and the inks.